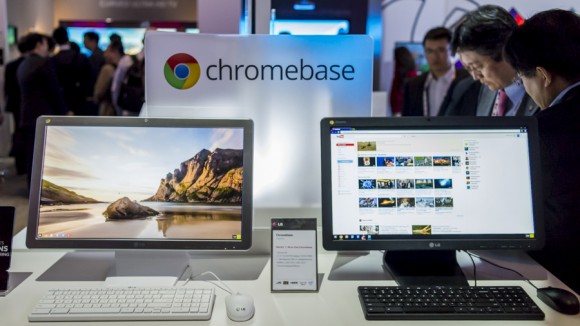 Why is Google so intent on entering into the world of desktops? Desktop sales might be projected to fall behind tablets and laptops, but they still make up a sizable share of the market, and it’s not a share that any computer manufacturer should completely ignore.

Thanks to its ever popular Android operating system, Google has become a major player in the mobile computing space. Now, it’s expanding its scope into an area of technology that has been steadily dwindling: the desktop PC.

Google has already made its presence felt in the laptop/netbook arena with multiple versions of the Chromebook, a compact, low-cost laptop that is largely dependent on an internet connection. The company has even made forays into the web-based entertainment world with Chromecast, an inexpensive Roku-like dongle that plugs into your average HDTV.

Although the price and availability haven’t yet been announced, the LG Chromebase is Google’s answer to the all-in-one PC. With its rounded and minimalist design, the Chromebase will certainly look good on a desk. It comes with 1080p display, 2 GB of RAM, webcam, HDMI port, and multiple USB ports. (And yes, the keyboard and mouse are included.) It ships with Google Chrome OS, an operating system that provides automatic backup and updates. Although a purist might consider its 16 GB flash memory very sparse, this PC is intended to be connected to the internet at almost all times. As a nice bonus, Google has thrown in 100 GB of cloud storage, tied into your Google account.

Suppose you don’t need everything the Chromebase offers? Perhaps you have two perfectly good monitors waiting for some kind of computer? In that case, the ASUS Chromebox would be a tidy solution. Priced at well under $200, this diminutive box can connect you to the internet, edit photos and documents, and play music or videos. A previous version of the Chromebox was debuted by Samsung in 2012, but with a price point north of $300, it failed to generate much interest. What about the ASUS reboot? 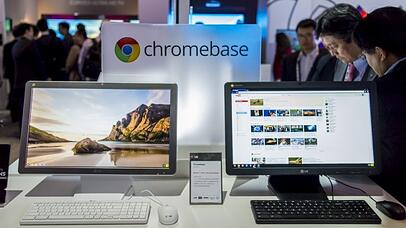 Like the Chromebase, the ASUS Chromebox’s entry-level model is light on memory, and its internal specs are more aligned to the netbook class than the high-powered desktop class. It comes with four USB ports, an HDMI port, a DisplayPort, and SD card slot. It supports dual monitors, HDTVs, and UHD playback. There’s even some functionality if you happen to be offline; you can still play games, edit docs, and look at photos. (This applies to the current ASUS Chromebox model; plans for more powerful versions of the Chromebox are already in the works. Rumor has it that Intel’s speedy i7 processor will be available on the higher-end editions, giving them a huge performance boost.)

Is A Google Desktop PC In Your Future?

The Chrome family of gadgets has its advantages. They don’t place as heavy a toll on system resources as Windows does. They’re designed to start up speedily, and they handle all of the updates and backups automatically. There’s also anti-malware protection built right in to the operating system. But there’s one major drawback: these quasi-desktop computers are still heavily tied to the internet and to Google’s ecosystem, and they don’t have the same processing power and storage of traditional desktops. In other words, as sleek and light as they may be, they really only are as good as your internet connection. With broadband and high-speed Internet the norm, this isn’t the drawback that it used to be. But it still can be a factor, and it should be taken to into consideration before you make your final decision.

Next Story
IBM Continues Buying Into the Cloud →

These Stories on Best Practices

How to Get Ransomware Protection: Best Security Tips and Tricks