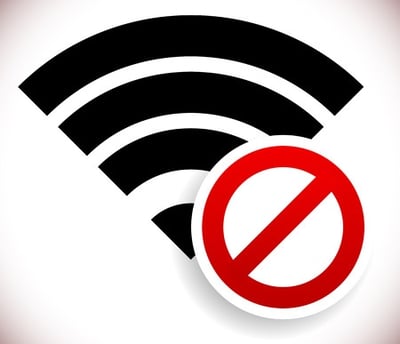 Recently, I connected to a friend’s Wi-Fi network, and my usually reliable laptop kept dropping the signal. Then I moved from the desk to the sofa—maybe a whole ten feet. Et voila! A signal steady enough to allow me to stream videos.

Welcome to the frustrating world of Wi-Fi dead zones. As almost everyone has noticed, Wi-Fi signals are anything but intrepid explorers. They are deterred by walls, doors, large metal objects—and apparently even sofas. In this article, we are going to talk about what you can do to eliminate those pesky Wi-Fi trouble zones.

The Internet is 25! Read this post of net-based trivia!

Finding these problem areas are pretty simple; in fact, you probably have a pretty good idea where they are in your home or office. If you have any questions, a slow patrol around each and every room will help you map them more clearly. Pay attention to both the strength of the signal and its speed. A drop in either one can indicate a potential problem.

Both signal-lacking and speed-sapping zones can be fixed by applying some common sense, a minimal knowledge of radio waves, and possibly by the purchase of some new gadgets. Let’s start with the no-cost option first.

Before You Buy, Try…

There are several reasons why your Wi-Fi router may not be giving off a strong signal. Before we talk about replacing it, let’s consider where it’s located. For example, a router that’s stuck in the basement of a house, next to a massive steel refrigerator, is going to have problems reaching anything on the other side of the refrigerator. It may also send a weak signal to upper levels of the house; the more walls, floors, wooden joists and other obstacles the average wireless router has to face, the feebler its signal becomes.

Think of the invisible radio waves that your Wi-Fi system uses as ocean waves. When they hit an object, the object is going to make some noticeable change in the wave. This applies not only to physical objects, but to other wireless devices (security systems, baby monitors, entertainment systems) and from everyday radio-wave producers like microwaves and cordless phones. Even if your router is in a central, relatively unobstructed place in your building, too much wireless “noise” can weaken a clear signal.

What can you do?

Sometimes, especially if you have a larger home or office, you need more than a quick reposition. You need newer, better, bigger tech.

If you’re using an older router, now may be the time to upgrade. Some companies have routers that are designed to cover larger areas, bouncing signals off walls and through floors for greater reception. Another option is supplementing your router with a range extender or a repeater device, which are simple enough for most home tech users to install. As the name suggests, a repeater device receives a signal and amplifies it, replaying it into a room for a boosted connection.

Other options include adding a second router to your existing setup (a bit dicey, if you ask us, and probably not something you should try without professional input) or using a broadband-over-power-line setup that actually uses your existing wiring to broadcast a Wi-Fi signal. Check out some of your options on this blog from tech company D-Link.

In need of expert IT assistance? Whether it’s Wi-Fi or a slow PC, contact Techspert Services today!