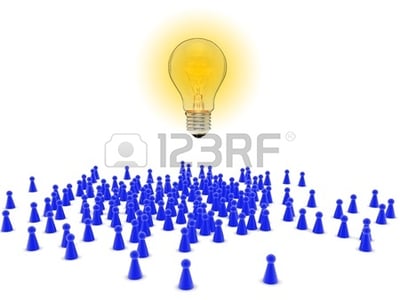 We talk about cloud-based trends quite a bit on this blog. Today, we’ll talk about a similar-sounding (but quite different) trend: thecrowd-based concept.

As you may know, the Internet just hit its 25 anniversary. In fact, we recently did a blog post on some little-known Internet trivia to commemorate this milestone. One of the ways that the Internet has changed how we do things is by the rise of the crowd, not just the cloud. Specifically, we’re looking at crowdfunding and crowdsourcing.

Imagine that you were going to write a dictionary of the English language. You could sit down and attempt to write it all yourself, thus effectively ending any chance of a social life you might have. Or, you could enlist help—lots of help.

In the past, you may have been limited to a couple dozen helpers, or maybe a hundred. With crowdsourcing, you could quite possibly rope in thousands of people to help you with your dictionary. That’s the basic idea of crowdsourcing: taking a task and splitting it up into many bite-sized pieces that a crowd of Internet-connected humans completes.

Crowdsourcing can be used in several ways. For an idea of how it works, considerAmazon’s Mechanical Turk program. Micro-jobs get posted on this site that range from defining a single word to writing a short article, with commiserative payment of a couple cents on up. If you wanted to get your dictionary written quickly, crowdsourcing it would be the way to go.

Crowdfunding carries on this idea of splitting up a big project into lots of little ones. Only this time, it’s all about the money.

Suppose you finished your dictionary, but you needed $15,000 to promote it. Rather than asking one donor for the cash, you could use crowdfunding, asking thousands of people for investments. However, crowdfunding isn’t simply money there for the taking. At Kickstarter and other crowdfunding venues, it’s expected that the asker will put together a compelling presentation, as well as a sort of incentive package that changes with the donation level. This incentive package could be anything from a social media shout out to an autographed original creation. Each project has a deadline, a minimum funding goal, and other parameters to meet.

It’s hard to see how crowdfunding and crowdsourcing could work without the Internet. They are two more ways that technology has changed how we do business.

How’s your business IT holding up? If it’s time for an IT renovation, let the Techsperts team help you find the best solution to your needs!