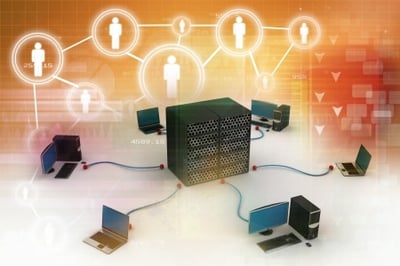 Networks are all around us, but do we know how they work? In this series, we’ll look at the basics of computer networking, from hardware components to security practices. This is the first post in the series.

You can probably tell wired network from a wireless network at a glance. One has wires connecting the computers, the other doesn’t. End of story, right? Not so fast. Each type of network has its pros and cons. In this post, we’ll discuss three of the main issues: ease of use, security, and reliability.

Wired Versus Wireless Networking: Ease Of Use

Wireless networks—by which we mean Wi-Fi, since they’re the most popular—are easy to set up, and the number of users you can add is huge. Technically, you should be able to connect over 200 devices to one Wi-Fi network, but don’t try. The results spell S-L-O-W. The more users you have, the slower your network will be, much like cars in rush-hour traffic. Got a new hire? Add your Wi-Fi info to their laptop, and they’re ready to go.

Wired networks, on the other hand, are limited to physical connections. Network professionals can and do connect a huge number of computers to a company-wide network, but it’s a more time-consuming process. Wired networking also has the aesthetic drawback of wires running to and fro. These can be hidden, but they’ll still be there. Fortunately, the actual cables are pretty cheap.

Wired networks generally have the edge compared to their wireless comrades in terms of speed and reliability. Unlike Wi-Fi networks, which are open to interference, wired networks have a physical link between each computer and the servers, which basically run the show from a networking point of view. Sure, this link may go through several devices, but it’s still tangibly there.

Wireless networks can be slowed by non-computer devices—even cordless phones. And, as any homeowner with a Wi-Fi network knows, there are usually areas where the signal fades to nothing. Careful planning and judicious hardware deployment can minimize these problems; read this post to find out how to fix Wi-Fi dead zones.

Wired networks also come out on top when we measure security. Once again, a big part of the reason is that access is restricted to a physical machine or connection. Unlike Wi-Fi, where signals bounce around randomly in the ether, to be picked up at will, wired networking has a finite limit. In a wired network, if you have six connected devices, you have six access points. It’s as easy as that.

This isn’t to say that you can’t have a reasonably secure Wi-Fi network. You can, especially if you “hide” the signal, making it harder for unauthorized devices to pick up. But there is no physical barrier between your network and any unethical person who wants in.

Does this mean wireless networking is inferior? No. It’s a very popular option; even companies who have an established wired network might add a wireless component to it, thanks to its quick and easy access.

Next week, be sure to catch our second post in the series, which will talk about networking hardware. Can you tell the modem from the router? You’ll be able to next week!

Network problems slowing you down? Contact Techspert Services today, and we’ll help you find a solution.