What is a Firewall? | Managed IT and HelpDesk Solutions

We spend a lot of time discussing security on this blog. It’s not just because we’re IT professionals and interested in the subject; business owners are too. In a 2013 study by the National Small Business Association, 94% of the nearly 900 small business operators said they were concerned about online security. So, it’s no surprise that Internet security programs sell like hotcakes every year.

A good Internet security program rests mainly on two things: an antivirus component and a firewall. The great ones add in other tidbits, like special browsers, safe search toolbars, social media scanning tools, and parental controls. But the major portion of staying secure falls to your antivirus and your firewall. We’ll discuss how the antivirus (actually anti-malware, because it scans for more than just plain old viruses) works next week; for this week, we’ll figure out the firewall.

A Firewall by Any Other Name 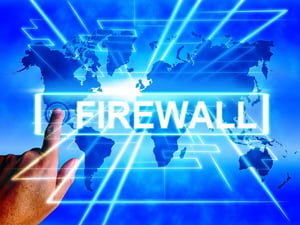 Imagine your firewall as a high, solid, stone wall around a medieval city. Those walls kept invaders out, but they had gates that also allowed those inside the city to carry on commerce and interact with outsiders. This, in fact, is the basic function and design of a firewall. Legitimate programs are accepted inside your computer, and these safe programs are allowed to send and receive data through the Internet. Shifty, potentially arduous, or actively malicious programs are blocked, quarantined, or deleted.

While we might immediately associate firewalls as programs on your desktop or laptop computers, they are also found at two other points. If you have Wi-Fi, there should be a firewall in your wireless router that performs some basic sorting and monitoring. And within individual computers, some programs have their own highly specific, built-in firewalls that manage access to and from that program.

Do You Need a Firewall?

Yes. The only reason not to have a firewall running in the background is if you never connect your computer to the Internet. Even if you’re connected only part-time to the World Wide Web, you should have a firewall installed on your PC. (Mac, Linux, Android, and other operating systems need an active firewall too; although viruses do not heavily target these platforms, they can still be targets for hackers, adware, and other problematic applications.)

Money needn’t be a concern here. Since Windows XP, a basic firewall has been included with every Windows OS. While this program isn’t the absolute best, it’s better than nothing. Other companies make noteworthy free firewalls. ZoneAlarm has a long history of locking PCs down tightly, and Comodo offers another good product.

Like the gates of our medieval walled city, a firewall controls what comes in and (in most cases) what goes out of your computer. This is called a two-way firewall. The default Windows firewall only monitors incoming connections, which is why it is not our recommended free firewall. Monitoring incoming programs may block access to your computer, but it won’t prevent spyware and other programs already on your PC from sending out your data.

How does your firewall know what to accept and what to refuse? It scans packets (small groups) of data as it comes from the Internet onto your computer. If they don’t meet a set of specifications, they’re dropped—not sent back upstream, but simply denied access to your computer. Conversely, if they contain certain markers, set either by the user or by the firewall software, they will also be dropped.

Two-way firewalls also scan what’s going out of your computer. If it looks like a program is harvesting data to send elsewhere, the firewall will either notify you or prohibit the action. Firewalls can block specific websites from accessing your computer.

A third way that firewalls protect your computer is by disguising open ports. An open port, like an open door, lets information in and out. As you might guess, they are lousy at keeping intruders out. Good firewalls will monitor open ports to make sure they are not being misused. They may also stealth ports, which makes them harder for hackers to trace.

A firewall is critical. Without it, your computer is not even half-secure. To learn about antivirus scanners and how they work, tune in next week!

Previous Story
← How Small Businesses Use Technology?
Next Story
Will Video Games Influence Your Next Hiring Decision? →

These Stories on Best Practices

How to Get Ransomware Protection: Best Security Tips and Tricks