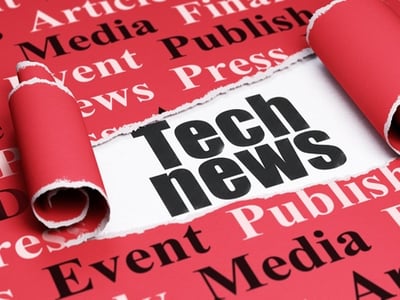 This month, we’re letting industry giants like Microsoft, Facebook, and Google have a rest. Instead, we’re going to talk about data caps, how the Internet of Things (IoT) is joining the NFL, how Pinterest may have just made itself even more popular, and an interesting mashup of new and old tech.

Like streaming movies? We do too (at home, not at work). Apparently, though, our movie-streaming habits are causing companies like Comcast to rethink the idea of unlimited bandwidth. According to this CNN Money article, Comcast has starting testing a capped Internet service, much along the lines of your smartphone's data limits.

In the past, Comcast did attempt a data cap that was never really enforced. This time, customers will be charged when they go over their limits. But don't worry; the data allowance starts at 300 GB a month. That's much more than the average home uses. As for business users, the article wasn’t specific, but I’d venture to say that 300 GB would take care of the average small business’s web-browsing needs.

A while back, we wrote a couple of articles about the Internet of Things, the web of interconnected devices that are being used to harvest data in formerly impossible—or at least highly improbable—ways. The latest and most surprising IoT announcement: that the NFL is getting onboard. The league has plans to install sensors in players' uniforms, reports BizTech, with the goal of keeping players safer and generating a more interactive experience for fans and coaches.

Have you ever searched for something online and thought “I don't know what it's called, but it looks just like that?” Who hasn't? Pinterest's latest feature has got you covered. Called a visual search tool, this feature lets you draw a box around a particular item—say, the landmark Big Ben in London—and search for similar items. And, Entrepreneur reports in this post, Pinterest will even tell you if the item is for sale. Big Ben probably isn’t; but a clock, definitely would be.

So, if you had any doubts about Pinterest's relevance to your sales technique, it may be time to rethink them. This social media site has gone from a giant visual repository of ideas to a bona fide marketing tool to an actual marketplace.

This last item isn’t the most practical, but it’s the least expected. Aside from a brief flirtation with tin foil, wax cylinders were the oldest form of sound recording. Sure, plastic and vinyl came along in time, but wax had one major advantage: it could be reused many times—just scrape the indentations off, and there you go! Brand new recording medium at your service.

Understandably, between wax’s melting propensities and the fact that reuse was a popular thing back then, wax recordings haven’t fared very well in the passage of time. So it’s pretty cool to read on CNET that the University of California, Santa Barbara is using one of our most modern technologies—streaming—to make the contents of thousands of wax cylinders available to the Internet-connected public. Sure, the audio quality may not be all that great, but the chance to hear history is.

Join us next week as Techsperts Talk delves into more IT-related topics, handpicked just for you!